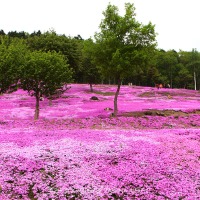 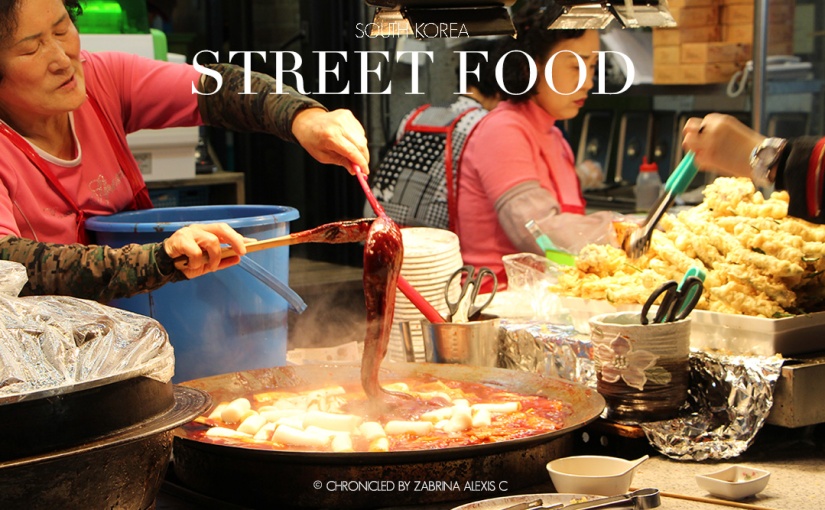 Some of South Korea’s best loved dishes are sold from giant iron woks at open-air stalls or the front of carts, with people standing about and huddling around to order and eat. Today, I’ll be sharing with you about a few of these, and what to look out for in your hunt for great street food, so let’s begin! 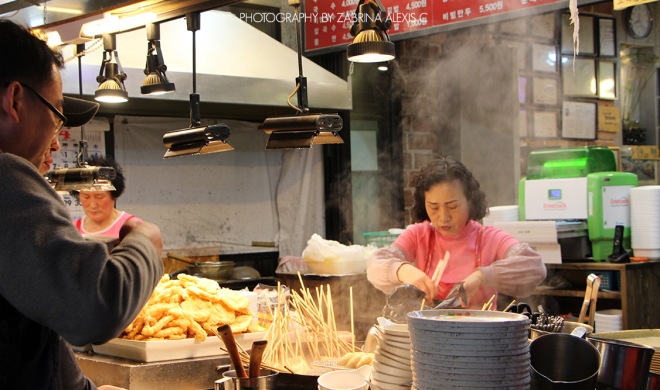 #1 Odeng 오뎅 Also known to many of us as fish cake, these are the cheapest street food and stalls dishing out sticks from a rolling boil are a dime a dozen. In general, there’s no need to be too picky about odeng since it is a fuss-free type of food and does not vary spectacularly in quality, but join in and stand shoulder-to-shoulder with the locals for a truly authentic experience (and also because they know where the broth is better). 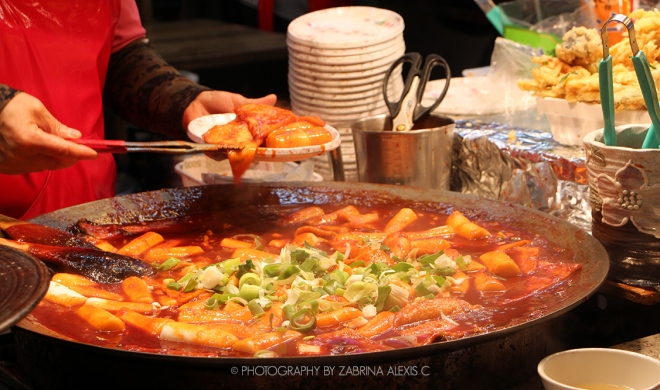 #2 Tteokbokki 떡볶이 Probably the number 1 export to Korean restaurants around the world, Tteokbokki is famed as one of the “must-tries” when in Korea. Tteokbokki is a springy, chewy and dense rice cake that comes drenched in a spicy red pepper paste sauce that you will find so “Korean” (they love this sauce and use it on many things). And yes, it can look rather messy, but don’t let that deter you! Again, it’s all in the sauce so go where the locals go. 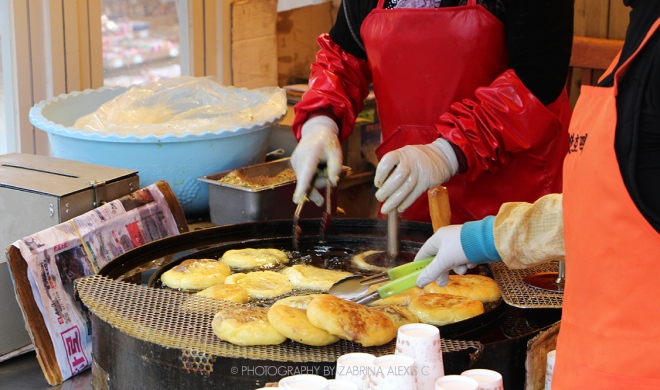 #3 Hotteok 호떡 I could eat 10 of these in one sitting. Hotteok is a sweet Korean Pancake that is fried then cut open and filled with a mixture of sunflower seeds and brown sugar, and often folded and then squeezed into a paper cup for easier handling. Always go to those where they’re frying them fresh (i.e. avoid those that have been pre-fried and left to sit), because that way the batter is tasty and with the slightest bit of crust, and the brown sugar caramelises between. You will smile, and so will the kids. A lot of the places pre-fry but there’s a great one just across the road from the Haeundae market along Jungdong 1-ro; a small shop about in a row of shophouses. 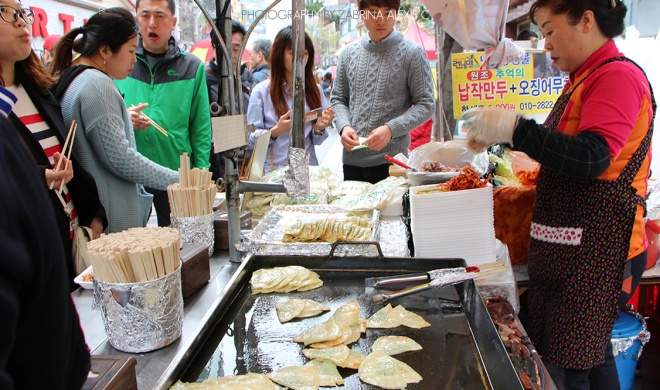 #4 Mandu 만두 Freshly fried and off the grill, these are basically a sort of dumpling and can be either filled with meat or vegetables or both. This one at Nampodong near the Jagalchi Market in Busan came with a side of finely sliced and crisp cabbage in a tasty spicy (note the expression of the guy in green) sauce. On a cold day, this is just heavenly heat in the tummy, and is definitely something you have to try. The key to mandu as well as a lot of the other street food, is to make sure they have a busy business and are making it fresh – otherwise they’ll just be doughy and chewy. So now I know what I need to try, but where do I go to get them? They’re all over Korea, but if you want to try multiple of these in a single place, Nampodong and Gwangbokdong in Busan are great. In Seoul, head to Namdaemun which opens till the wee hours. Namdaemun is also a great place to do souvenir shopping because prices are easily 1/5 or less of the price you’d pay at the airport duty free! 😮 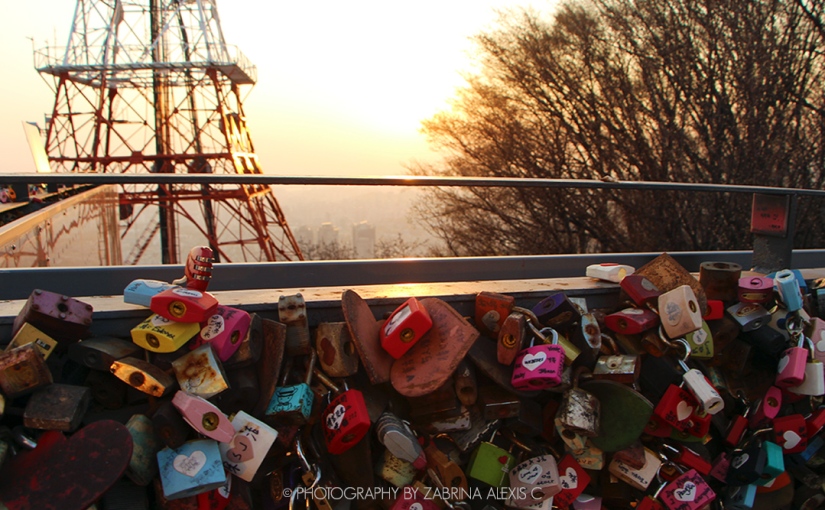 So many; Love locks hanging in the waning light
Yet none of them are really quite alike
Some are big and some are small,
Some have been weathered; rust and all
For one out of naivety, another perhaps assured,
But neither promise could be insured

For you and I, we are individuals all
Sometimes we just cannot predict a fall
But those who keep strong in the rain,
May find their love holds through the strain
And at the end of a time of trial –
Their love locks fused, never to exile

Some forlornly looking in quiet haste,
Others holding hands in rapid chase
Fingers are traced around an etch
While toes are tipped to peer past the hedge
Love locked lovers in embrace,
Navigating through life’s intricate maze.

In response to The Daily Post’s weekly photo challenge: “Intricate.” 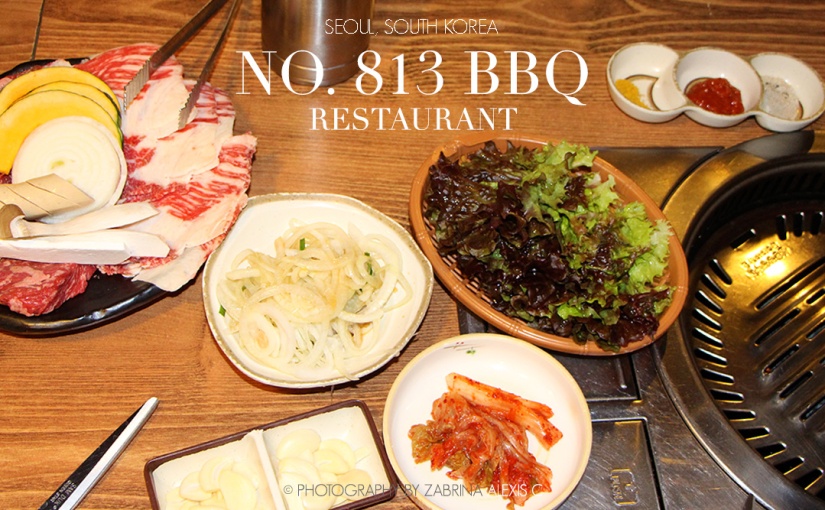 Anyone who’s been to Korea or has watched any K-drama would know how much the Koreans love their barbecue. While I was in Korea, we had barbecue at least 5 times in 11 days, and man, that is A LOT of barbecue. When we first arrived in Seoul, we stayed in Gangnam-gu, and so I’d planned out an entire list of food places to go in Gangnam a week ahead. No. 813 BBQ Restaurant had been on Lady Iron Chef’s list of 17 Best Restaurants and Local Eateries to Eat in Seoul, and so was assigned as dinner stop for day 1.

Contrary to what was said online, it wasn’t all that hard to find, especially since No.813 has 2 units next door to each other – the larger one being to the right of the original one, with a slightly more modern (and less authentic) feel to it and also twice the size of the other. Since it was already the late afternoon, we ambled around Gangnam for a bit until 5pm when they re-opened for dinner.

No.813 BBQ Restaurant has reasonable value with decent portion sizes, and we left reasonably full after spending about $20 each on a set selection of meats and some kimchi stew, but keep reading…

It’s decent barbecue, but that’s all there is to it. This was the first barbecue we tried in Korea, and while the cuts of meat I thought were pretty average (and some of the meat was practically served just out of the freezer and had to be left defrosting at the table), we thought that all in all it offered good value… until we tried barbecue at like 4 other places, including one more in Seoul.

The kimchi stew here paled miserably to the one we had at Heukdonga on Jeju-do, and the side dishes were very average and limited (as compared to every other place we dined at while in Korea). Service was terrible; although we were only one of the two groups of guests, we had to wave several times just to get the attention of wait staff who were too busy chatting with each other over the counter just 3m away, and had to request multiple times for another serving of kimchi stew and kimchi which never arrived. 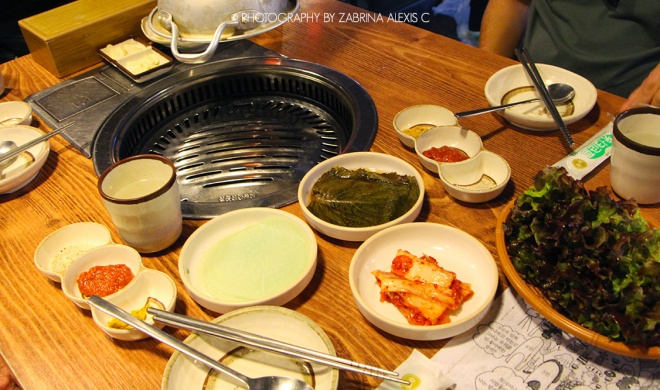 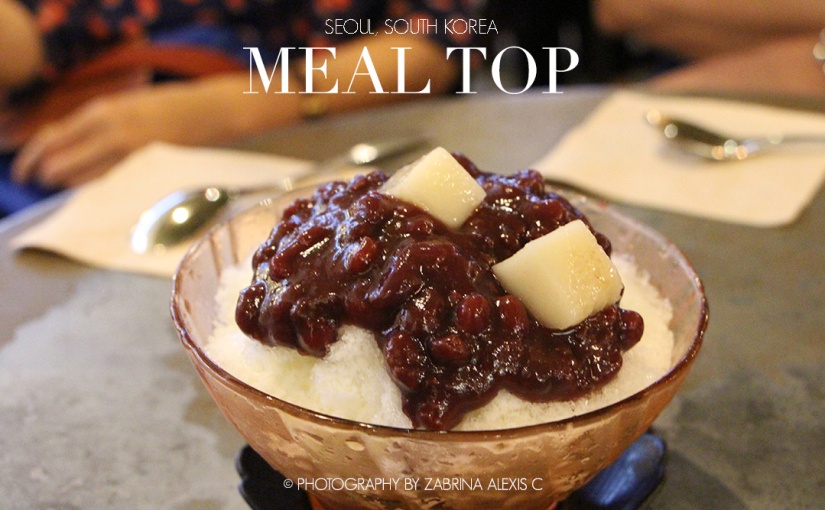 So apparently the Koreans are crazy about their bingsu, a dessert made from ice shavings, and topped with fruits or red bean, etc. (there being many renditions). Meal Top (밀탑) is one of the more famous ones and comes very highly rated at 4.5/5 on Tripadvisor, and is particularly famous for the ones with red bean topping.

The Hyundai Department Store is right at Apgujeong metro station, and taking the escalators up to the fifth floor, you’ll be delivered right to the doorstep of Meal Top. You’ll hear it before you even see it – the clatter of cutlery and dishes and a busy chatter comes as a bit of a surprise as you navigate the escalators up past floors 3 and 4 which are full of luxury label shops and also extremely quiet.

Each bingsu is about 8,000 KRW (~$10), which I find mighty expensive for something that comprises largely of shaved ice. Bingsu in Korea is pretty much one of the best ways to blow your money in a wink because they’re all about $10 (the cheapest one I came across was about $9). I had bingsu at 4 places around Seoul and Busan while I was there, and not once ever really left the shop feeling like it was worth the money. Nonetheless, it is a very Korean dessert, so you should probably try it at least once.

To Go: Maybe once (whether here or elsewhere, it doesn’t really matter)

I wouldn’t be at all surprised if the profit margin on the bingsu is probably somewhere close to 90%, before the utilities and wages of course. The red bean, whilst wholesome and generous, could not divorce from the fact that it was still just a red bean paste, simply dolloped on top of shaved ice drizzled over with some condensed milk. The dessert was simple, good and tasty, especially if you’re having it on a warm day, but the thing that I found most spectacular, was oddly nothing to do with the dessert at all.

The service was impeccable from start to finish. Meal Top is an open-concept cafe, and the moment I stepped in from the ‘wrong’ side, the manager immediately spotted me, graciously ushered me to the seating area on the other side and pulled a waiting number from the machine for me. It was running at full house and there were several people ahead of us in the queue, but the wait wasn’t long. I watched, fascinated, as waiters transported trays of dessert barely 2 minutes after it was ordered, and as they swooped in on tables the moment guests departed, readying it within seconds for the next guests to be seated. 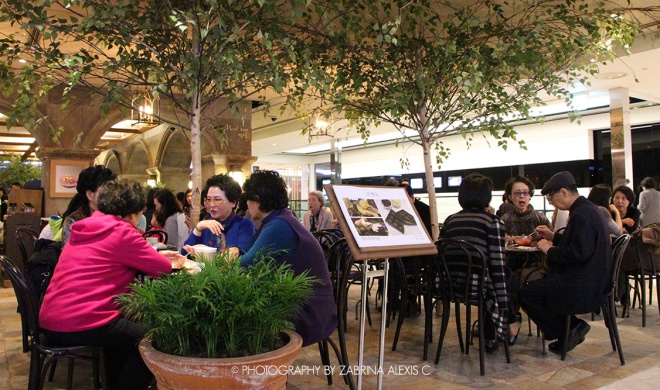 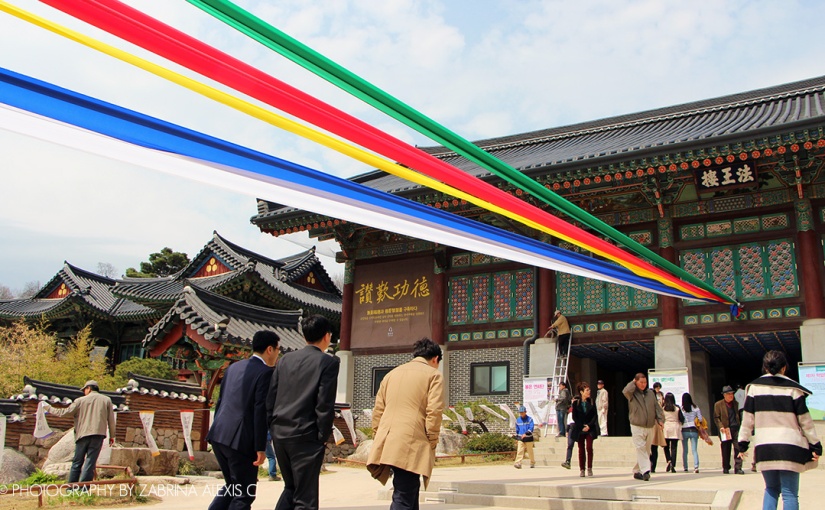 I’ve just returned from Spring in South Korea – a great time to go, with gorgeous and breathtaking scenes of Cherry blossom trees. On my first day in Seoul, I set up basecamp at a hotel in Gangnam-gu. Gangnam is a beautiful trendy district (made famous by Psy’s “Gangnam style” song) with lots of cafes and indie label shops, and lies to the south of the Han river, which winds horizonatally across the city. It is an area obviously loved by the teens to 20 somethings, but probably not so much the elderly because I hardly saw them hanging about.

Bongeunsa Temple lies in the eastern part of Gangnam-gu, just north of the sprawling COEX mall, and is an unexpected sight amidst tall buildings decked in glass. Near the entrance to Bongeunsa, street beggars sat or walked up to visitors waiting to cross the road at the traffic lights, holding their hands together with dark crinkles of toil etched into their tanned skin. Inside, there was a sense of quiet calm – especially in the gardens. I drifted from one building to another, drawn by the beautiful green and red-brown coloured paints incorporated into a simple but seemingly complex design and the neatly tiled roofs of slategray. Rows of brightly coloured paper lanterns folded into lotus flowers were strung across the ceiling of the main prayer building, and I watched silently as a lady unclasped her hands and lifted a flame to light a candle at the altar.

Open all year round; There is also a 2-day temple stay activity should you wish to participate. Alternatively, there is also a 3hr programme where you can experience participating in different temple activities. 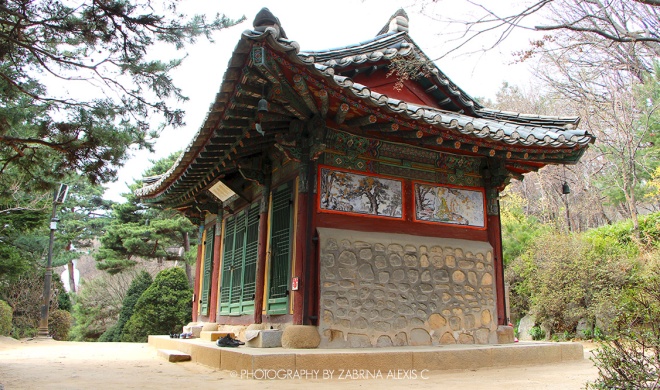 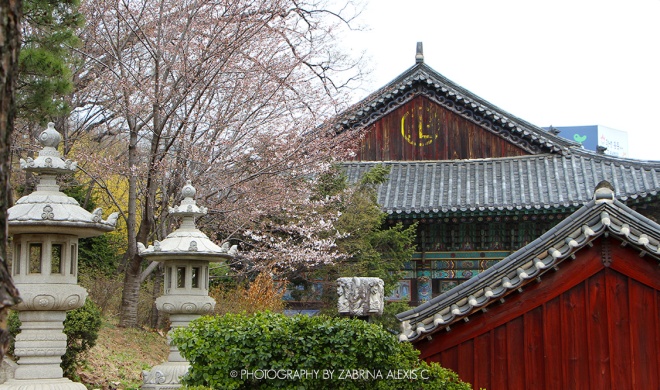 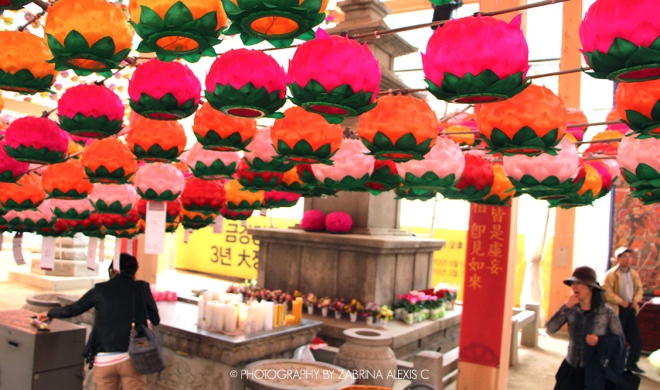 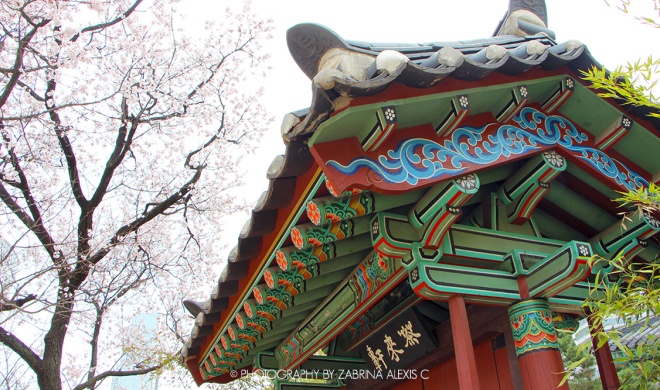